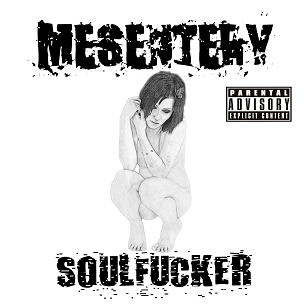 For the new "Soulfucker" Album:

... a contemporary update of death metal - there is still enough old school, never too modernistic, with a lot of mid-tempo and mechanical rhythms that strive for something slightly convoluted, fine accentuations in the guitar playing and, in addition to direct catchiness (as with ´ Virtopsy' with its ominous Slayer riffs) more subtle melody that shouldn't wear off anytime soon!

... The new disc includes groovy melodies, strong and driving riffs as well as good drumming; Furthermore, the combination of Death and Thrash Metal invites you to headbang and mosh...

… death metal based, but modernized grooving sound, which seems a bit straight out of the early 2000s, but at the same time does justice to the era that one is inspired by, because one comes up with an album-spanning concept... the The author's tale of woe between a children's home, drug addiction and procurement prostitution - and MESENTERY deal with exactly such material in lyrical and musical terms on ten songs in 48 minutes, to which Dark Age fronter Eike Freese gave the final touches ... Welcome back, guys!

... The songs are quite driving and full of energy, always played directly against the wall. It's really fun to listen to this album...

... Altogether there are ten songs that drive a totally exciting Death Metal disc with an aggressive basic attitude, which doesn't stop at Thrash and other Extreme Metal influences.

... by adding different styles to the old school death, like there was some thrash, crossover, hardcore and other influences, it somehow didn't become a pure death album, but it grooves immensely, but it can only be attributed to the groove metal, that would probably have turned out a bit too cheap, because this clearly has more potential, since influences from the founding period can also be heard clearly and «Soulfucker» can be made into an interesting musical part. The production is crystal clear, the cover artwork could also represent the book cover of this ominous Natascha and her abysmal biography of extreme excesses... Well, the nice thing about trios is that all instruments are easily heard, which is another plus point. The bass sounds heavy, clear, warm, booming, both in the rhythmic and solodesk areas. The drums bang heavily with a lot of double bass, sometimes grooving in mid-tempo, but always driving forward very powerfully, with a hard snare sound, clear cymbals and toms, which sometimes loosen up the whole thing. The guitar is both prong and pantera-like riffing, contains short, melodic and solodesque excursions, as well as the crossover, well-known melody arcs. The vocals are not necessarily guttural, rather aggressive and angry shouting as well as screaming, in the lowered sediment, always understandable, slightly sodom-like, somehow, but it fits perfectly with the overall sound work. Comparisons to Pantera, Sodom, Prong, C.O.C., some Jungle Rot and Assorted Heap and the like have not failed. Playing tips are «Punisher», «Damned Liars», «2025» and «Mesentery».

... combines old school death metal with brutal thrash and extreme metal in a very varied way. The lyrics are about our sick, egocentric and greedy society. The true autobiography of a female drug junkie is processed in the title song.

Producing an album today that deals socially critically with the permanent misconduct of today's society is still one of the hottest topics of this time. How do you feel when all facets of human atrocities are brought to you every day and there is hardly any time to process them? This powerlessness results in permanent anger, which has managed to create the corset of the ten spiteful tracks on "Soulfucker". In terms of content, this good three quarters of an hour of playing time serves as a last warning to all those who are still blindly following this sick, egocentric and greedy society without fighting against it. The title theme, which is based on the ruthless biography "Seelenficker", in which the author, under the pseudonym Natascha, traces her relentless, unembellished time on the drug street and as a crystal meth addict, delivers particularly hard stuff.

All the resulting feelings bring the mix of Thrash Death to a boil in the truest sense of the word. But in addition to the driving energy, MESENTERY know how to incorporate a lot of melodic elements in addition to the constant rage. In addition, the trio also processes the melancholy, as can be painfully experienced on "The Time Before Death". This kind of barbaric 'sleeping with the soul' not only degenerates into an explosive mixture due to its extreme influences. Between precise, groovy riffs, angry vocals and harmonious melody peaks, a great arc of suspense is built up, which openly reveals his aversion to the abysses of humanity.

… after a break of almost ten years Mesentery are back with their new album ‘Soulfucker’. Frontman and guitarist Marcel Braun is ready to inject fresh life into the resurrected band with the new albums varied ten tracks and their mixture of Death, Thrash and other extreme metal influences. ‘Soulfucker’ was recorded at the legendary Chameleon Recording Studio Hamburg and produced by Eric O. Freese (Helloween, Alice Cooper, Heaven Shall Burn). The album is defined by anger and pain about the misbehaviour of society. This manifests itself most in the title theme which is based on an unsparing biography ‘Seelenficker’ where the author using the pseudonym Natascha traces her time in drug-related prostitution as a Crystal Meth addict. The album’s lyrics are a warning about how sick, greedy and self-centred society is.

‘Soulfucker’ kicks off with the title track which takes us straight into the above-mentioned theme of the album. Changing tempo throughout, it has quite an industrial sound to it while still being brutal. ‘To Be The Odd One’ is next with its stop/start feel again sounding brutal yet melodic in both guitar and vocal sound. Track three ‘Punisher’ is my favourite track on the album. It’s a rollercoaster ride through metals genres with powerful riffs and is actually quite catchy in parts. ‘The Time Before Death’ has a slower intro but soon descends into Death Metal territory with its powerful sound and desolate lyrics. ‘Damned Liars’ continues the journey of despair before ‘2025’ takes into the thrash zone and lyrically warns us of potential disasters to come. Track seven ‘Inevitable’  lays out another doom-laden scenario, crushing guitars and a mournful tone to the vocals. ‘Virtopsy’ is a warning about the digital world and is a melodic/powerful death metal song. ‘Quo Vardis’ is a strange little twinkly interlude lasting only a few seconds ‘Mesentery’ rounds off the album, its gentle start interrupted by some head-crushing riffs and defiant lyrics. A good ending to the album.

Overall I found this album hard to put in a ‘slot’. It really does flip from one style to another; Industrial, Death, Thrash, Melodic, Brutal it’s all on here. I really enjoyed the ride and fully recommend this album for fans of ‘Unleashed’, ‘Carcass’ and ‘Hail Of Bullets’ along with people wanting something a little different to listen to.

...I'm glad that band leader Marcel Braun gathered all his strength and full of energy resumed the chapter MESENTERY. On the one hand, the album offers typical Death Metal: A powerful groove and a lot of anger on the one hand, a quite dystopian-apocalyptic atmosphere and fat blast beats on the other. In addition, meter-high guitar walls and the "soulfucker" all-round impact is perfect. But despite the hardness and darkness, the music on the album is also melancholic and almost vulnerable. The harmonies and melodies quickly cut through your bones and in combination with the powerful sound that Eike O. Freese is responsible for, "Soulfucker" is an incredibly intensive experience.

I often miss the common thread on death metal releases that runs from the opening title track, through the piercing 'Punisher' hit, the '2025' doomsday cue and my personal favorite 'Virtopsy' to the closing 'Quo Vadis'/'Mesentery' Double pack is consistently pulled through. The guys strive for variety - not always an easy task in Death Metal - but they make the best of the situation and let the dark atmosphere speak for itself. In general, "Soulfucker" is a huge piece of death lead, which not only bitingly draws attention to the current and possibly future grievances, but also has music ready that definitely counts among the better of the genre.

... Mastermind Marcel Braun served the vocals as well as the guitars and bass tracks himself. Soulfucker was recorded in the legendary Chameleon Recording Studio Hamburg, produced by Eike O. Freese (Helloween, Alice Cooper, Heaven Shall Burn).

With this straightforward and ruthless album, MESENTERY definitely don't belong to the scrap heap and not only fans of bands like Unleashed, Carcass or

Hail Of Bullets will enjoy this disc.

Conclusion: ten varied tracks with a mixture of death metal, thrash and brutal grooves paired with extreme metal influences and old school riffs make Soulfucker an exciting and multifaceted work. With its aggressive attitude, an exciting, very drastic title theme and the socio-critical lyrics, the album is a must for underground death metal maniacs ...